The aim of the magnetic network surveys is to record the spatial and temporal variation of the vector components of the geomagnetic field. The Mining and Geological Survey of Hungary maintains two geomagnetic networks. The country survey network comprises 300 stations distributed evenly in the area of Hungary (15-20 km of avg. distance between the stations). The survey of this network aims to investigate the spatial variation of the Hungarian geomagnetic field in spatial wavelength bigger than about 40-50 km. Campaigns in the country survey network were carried out in 1964-65, 1984-85 and 1994-95. Note that the last campaign was accomplished in a reduced network comprising 195 stations. 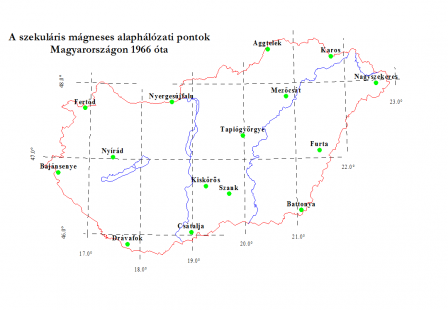 In order to monitor the secular variation of the geomagnetic field between country survey campaigns, a so-called repeat station (RS) network was established in 1966. The original RS network consisted of 15 primary and 22 secondary anomaly–free sites. The mean distance between the stations was about 80 km. In this network the measurements are carried in every second year with the satisfaction of strict requirement regarding to the measurement accuracy. The main instruments of the surveys are a one-axial fluxgate magnetometer mounted on the telescope of a de-magnetized theodolite to measure the magnetic declination and inclination, and a proton precession magnetometer to record the total geomagnetic field. The temporal reductions of the station observations are carried out with the use of the permanent magnetic records of Tihany Geophysical Observatory.

With our RS surveys we joined the European MagNetE organization, that was founded in 2003 to unify the practice and recommendations of the European network measurements. Our data are available for scientific purposes via the world fata centre (WDC) of Edinburgh.