Physics of Near Earth Space

In the context of space research our primary goal is to study Sun-Earth physical interactions, relations between the variation of the geomagnetic field and the processes evolving in the near Earth space.

Our research focuses on the investigation of nonlinear phenomena (e.g. MHD turbulence), ULF wave phenomena (or geomagnetic pulsations), as well as of the terrestrial plasma environment. 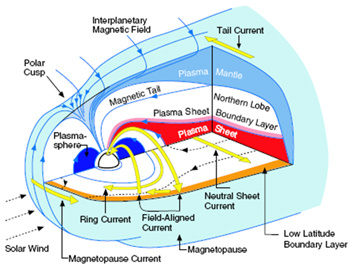 A source of geomagnetic variation is the dynamic magnetospheric current system.

Our investigations are based on the measurements we recorded at the Tihany Geophysical Observatory (geofizika.canet.hu) and at other sites, before all, along the EMMA chain of geomagnetic variation stations across Europe, as well as on space observations. From the time series recorded on the ground we can infer information on the processes evolving in the ionosphere (solar quiet current system, effects of solar eclipses and flares, equatorial and polar electrojets, etc.), the magnetosphere (geomagnetic storms, substorms, ring current, dynamics of the plasmasphere, location of the magnetopause, etc.), and we can even draw conclusions on the state of the interplanetary space (solar wind speed, interplanetary magnetic field, etc.).
We use magnetic, electric and plasma data recorded by spacecraft orbiting in the topside ionosphere (CHAMP, DEMETER, Swarm), in the magnetosphere and in the near Earth interplanetary space (Cluster, THEMIS, Van Allen Probes, IMAGE, etc.), and in the solar wind (ACE, Wind, Ulysses, Venus Express, etc.) to study the space environment.
The European quasi-Meridional Magnetometer Array (EMMA, geofizika.canet.hu/plasmon/emmapsd.php) consisting of 25 stations ranging from Finland to Italy was founded in 2012 involving nine countries with support from the EU FP7. The primary role of EMMA is the detection of ULF waves, and to monitor the plasmaspheric mass densities by means of inverting the detected ULF field line resonance frequencies.

Equatorial plasma mass density as deduced from EMMA observations made on a single day, expressed in amu.

Several international collaborational project have been based on EMMA data with partners such as the United States Geological Survey (Golden, CO), the Finnish Meteorological Institute (Helsinki), the ULF Wave Laboratory of the Russian Academy of Sciences (Moscow), the Helmholtz Centre for Geosciences GFZ (Potsdam), the South African National Space Agency (Hermanus), the Los Alamos National Laboratory, and several universities from Europe, the USA, Canada, Australia and New Zealand.
The International Space Science Institute (www.issibern.ch) located in Bern (Switzerland) offers opportunity for international teams working in any field of space science to be formed and venue for one-week workshops on its premises. Recently, we were invited to join the ’Magnetoseismology’ ISSI-group, a team of leading plasmasphere experts from all around the globe led by Peter Chi (University of California, Los Angeles, USA) and Fred Menk (University of Newcastle, Australia). The project aims at further improving and standardizing the plasmasphere monitoring techniques (www.issibern.ch/teams/spherethroseismo). The team will be active by the end of 2018.
We take part in the study of magnetic measurements made onboard the three Swarm satellites (earth.esa.int/web/guest/missions/esa-operational-eo-missions/swarm) of the European Space Agency (ESA) from the very beginning of the mission. Our focus is on ULF waves, the plasmasphere (geofizika.canet.hu/swarm) and nonlinear phenomena. Our activity is partly funded by ESA through various projects.
In the autumn of 2016 our predecessor, the Geological and Geophysical Institute of Hungary signed a memorandum of collaboration with European Organization for Nuclear Research (CERN) to support the preparation of the CLIC experiment (Compact Linear Collider) by investigating the potential risks arising from natural and man-made magnetic signals threatening the proper functioning of the planned linear collider, and by participating in the development of mitigation strategies.